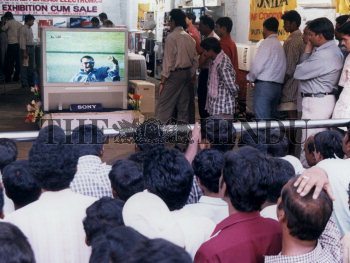 Caption : Saturday evening ended on a happy note for India, after the cricket buffs, rather the whole country, survived the extremely tense last over of the one-day international with Pakistan at Karachi. Those who have to come out even on a second Saturday, kept themselves abreast of India's fortunes by watching the telecast of the match at the showrooms, hotels or kiosks, or listening to the radio commentary. While some shops and eateries shut down their television sets as the crowds watching the match obstructed their business, the shop shown in the picture continued the show on a big television set. The crowd was so engrossed in the match, that some of them shouted at the salesmen for obstructing their view while moving some material. The peeved PROPRIETOR switched off the television set but put it on when the crowd begged him. Photo: K.R. Deepak. 13-3-2004