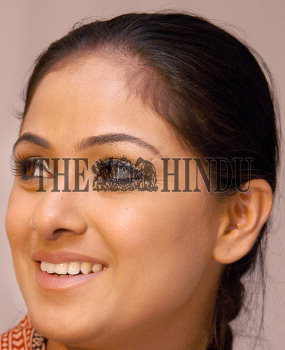 Caption : Film actress, Simran, at the Olympic torch-bearers selection programme in Chennai, on March 04, 2004. She inaugurated the launch of the Chennai leg of the nomination programme for selection of three torch-bearers from this city as part of Coca Cola India's nation-wide programme. The Olympic torch relay in India for the 2004 Athens Games, to be held in August, will have a touch of glamour as popular Tamil film actress Simran is slated to join it in New Delhi, on June 10th. Photo: V. Ganesan