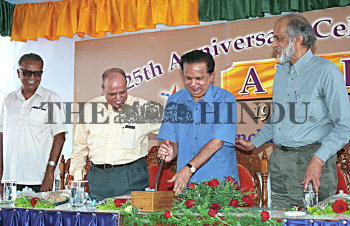 Caption : The ISRO Chairman, G.Madhavan Nair, pressing a lever to lay the foundation for augmenting the capacity of ISRO's Ammonium Perchlorate Experimental Plant (APEP) at Aluva, 27 kilometre from Ernakulam, on February 19, 2004. The brain behind this project, Dr. Vasant R. Gowariker, former Director, Vikram Sarabhai Space Centre,(right) is beaming with pride on the occasion, and on the left is Dr. K. Kasturirangan, former Chairman, ISRO, with N. Vedachalam, Director, Liquid Propulsion Systems Centre, ISRO, next to him. In 12 months from now, the APEP's present production of 300 tonnes of ammonium perchlorate a year will go up to 800 tonnes a year. Photo: Mahesh Harilal