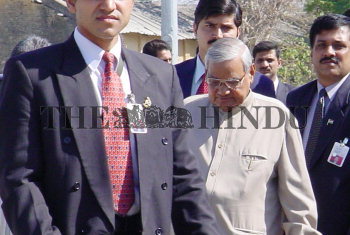 Caption : The Prime Minister Atal Bihari Vajpayee at the Bhopal airport as he leaves the State capital on February 17, 2004. Vajpayee arrived in Bhopal on February 16 to attend the wedding of his grand daughter. Photo: A.M. Faruqui