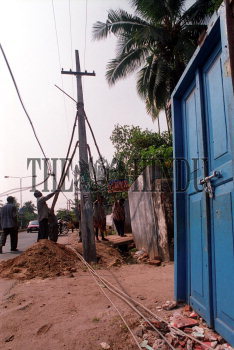 Caption : Electrical posts are relocated as part of the work on the Kaloor-Kadavanthra road in Kochi. The road is one among the three ring roads suggested in the 'Structure Plan for Central Cochin City', prepared by the Greater Cochin Development Authority (GCDA) in 1984 and approved by the State Government in 1991. The plan, meant for easing the traffic congestion in the city, was delayed for more than 5 years due to litigation related to land acquisition. The work is expected to be completed by the end of February, 2004. Photo: H. Vibhu