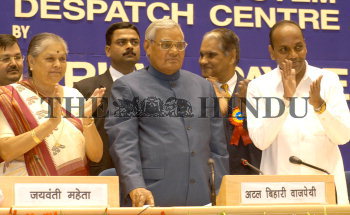 Caption : The Prime Minister, Atal Bihari Vajpayee, CLICKS the mouse to dedicate to the nation the Simhadri project of NTPC at Vishakapatnam, the Chamera hydroelectric power project of NHPC at Chamba, and the North-Eastern regional load despatch centre of powergrid at Shillong, at a function in New Delhi, on February 9, 2004. The Union Minister for Power, Anant G. Geete, and the Minister of State for Power, Jayawanti Mehta, are also seen in the picture. Photo: V. Sudershan