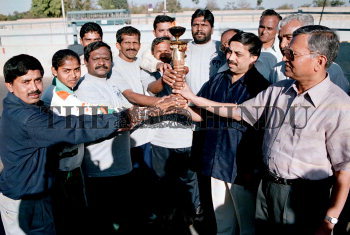 Caption : The State Games torch that crossed nine districts, arrives in Bangalore.The city Police Commissioner, S.Mariswamy, (ext.right) is seen receiving the torch along with the Karnataka Olympic Association officials and the torch bearers, on the eve of the State Games 2004, at Bangalore, on February 3, 2004. Photo: V. Sreenivasa Murthy