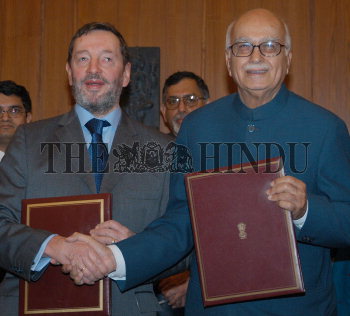 Caption : The Deputy Prime minister, L.K. Advani, AND the British home secretary, David Blunkett, in New Delhi on January 29, 2004, after signing an agreement on returning Indian immigration offenders. India is likely to release the convicted British arms smuggler, Peter Bleach, who is serving a life sentence in Kolkata, for air dropping arms for a militant group seven years ago. Photo: V. Sudershan