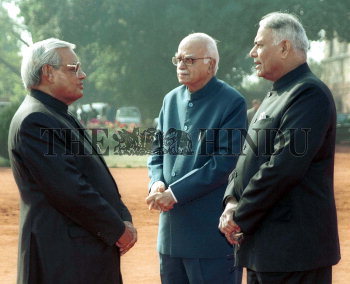 Caption : The Prime Minister, Atal Bihari Vajpayee, the Deputy Prime Minister, L.K. Advani, and the Union Minister for External Affairs, Yashwant Sinha, waiting for the arrival of the visiting Brazilian President, Luiz Inacio Lula da Silva (not in picture), at the Rashtrapati Bhavan in New Delhi, during a CEREMONIAL RECEPTION on January 25, 2004. Photo: Anu Pushkarna