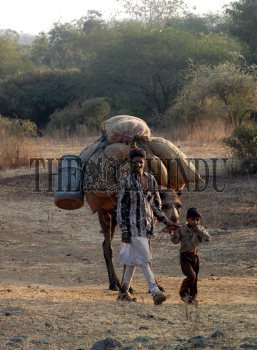 Caption : A Maldhari (livestock owner) walks with his son through the Gir Sanctuary to deliver milk in the nearby village. For over a century, the Maldharis have co-existed peacefully with the sanctuary lions, living all over the forest in small settlements known as Nesses. While earlier, there were 845 families in 129 Nesses, after a resettlement scheme, the number has come down to 360. The Maldharis earn their livelihood by selling milk and milk products. Photo: Paul Noronha