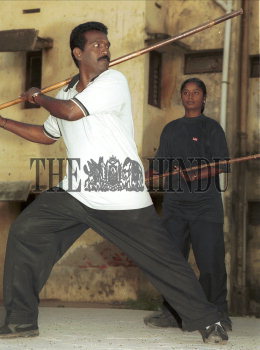 Caption : Women practising Silambam, an ancient martial art of Tamil Nadu in Chennai. Silambam has been on a comeback trail since 1980. It is now being taught in city schools, and women, who had earlier shown a reluctance to take up this martial art, have begun to show interest in it. Photo: S. Thanthoni 16-01-2004