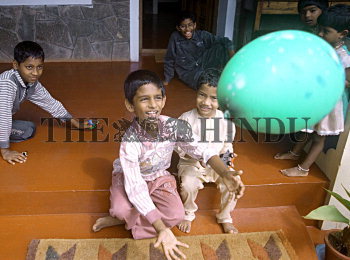 Caption : CHILDREN at the SOS Village in Edathala near Kochi. Student representatives from over 40 schools in the State, assembled at the SOS CHILDREN's Village, Aluva, to take part in a brief ceremony, at which a token amount of money was handed over to the International president of SOS CHILDREN's villages, Helmut Kutin on January 07, 2004. The Young Ambassadors, as they are called, did not represent any country but the nation of humanity. SOS CHILDREN's villages, that are spread over 135 countries, take care of poor CHILDREN who have no family. In India, there are 34 villages and 129 other institutions offering educational and medical care. The SOS villages have been able to cater to 2,00,000 CHILDREN in the country. Photo: Mahesh Harilal