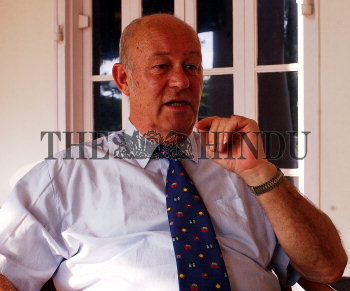 Caption : Mr. Helmut Kutin, president of SOS -Kinderdorf International in Chennai on January 05, 2004 for the silver jubilee celebration of "SOS Children's villages of India, Chatnath Homes". Based on the ideal of "providing abandoned and orphaned children a substitute for their lost families", the SOS concept started in 1949, soon caught on. In 1960, SOS-Kinderdorf International, the umbrella organisation of SOS children's villages, was born. Gmeiner was at its helm till his death in 1986. The mantle then passed on to Helmut Kutin, who has since built 154 more SOS children's villages around the world. Under Mr. Kutin, the movement flourished in India too. Photo: N. Balaji