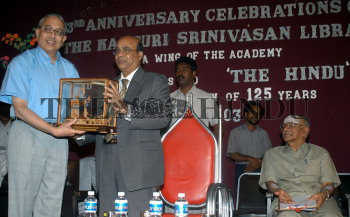 Caption : Mr. N. Murali, joint managing director, The Hindu, receiving a memento from Mr. B. Subhashan Reddy, chief justice, Madras High Court, at the 43rd anniversary celebrations of the Kasturi Srinivasan Library, a wing of the Triplicane Cultural Academy, and felicitations to 'The Hindu' on its completion of 125 years, at The Hindu Senior Secondary School in Chennai on December 29, 2003. Mr. G. NARAYANASWAMY, Academy president is also seen. Photo: N. Sridharan