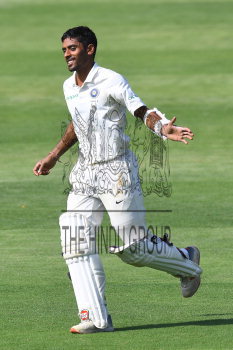 Caption : MYSURU, KARNATAKA, 13/02/2019 : India A batsman Abhimanyu Easwaran celebrates after scoring his century against England Lions Touring Team on day one of the second 'Test' at SDNRW ground in Mysuru on February 13, 2019. Photo : Sudhakara Jain