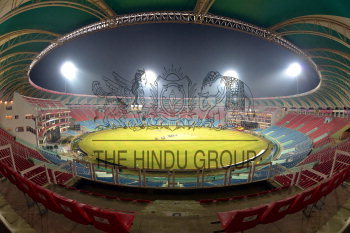 Caption : LUCKNOW, UTTAR PRADESH, 05/11/2018: EKANA STADIUM NAMED VAJPAYEE : On the eve of T-20 Cricket match being played between India and West Indies at Ekana International Cricket Stadium which is named as Bharat Ratna Shri Atal Bihari Vajpayee International Cricket Stadium in Lucknow on November 05, 2018. This stadium is constructed under public–private partnership scheme. It is one of the largest cricket stadium in India with a seating capacity of 50000 people. Photo: Rajeev Bhatt