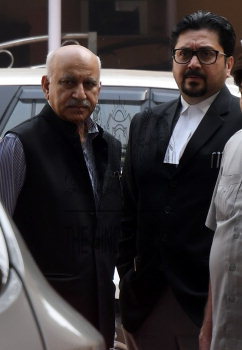 Caption : Editor-turned-politician MJ AKBAR after appearing before Patalia House Court where his statement was recorded in connection with a defamation suit filed by him against journalist Priya Ramani who had accused him of sexual harassment, in New Delhi on October 31, 2018. Photo: Sandeep Saxena