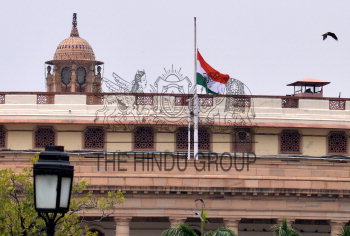 Caption : National flag flies at half mast following the demise of former PM Atal Bihari Vajpayee, at Parliament House, a seven-day state mourning has been announced as a mark of respect for Vajpayee who passed away at the age of 93, on August 18, 2018 in New Delhi. Photo: R.V. Moorthy