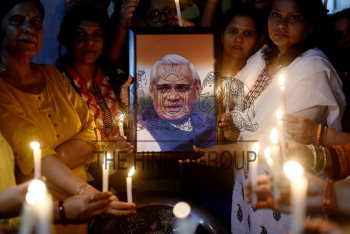 Caption : Fellow residents of LaPlaz, a multistoreyed building complex in Lucknow, paying homage to one of its residents, former Prime Minister, Atal Bihari Vajpayee after the news of his sad demise was announced at AIIMS, New Delhi on August 16, 2018. As an MP of Lucknow Vajpayee had permanant address as A-302, LaPlaz, Lucknow, Uttar Pradesh. Photo: Rajeev Bhatt