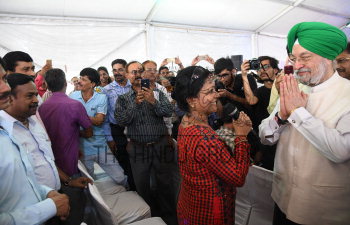 Caption : Hardeep S Puri, Minister of State (I/C) for Housing and Urban Affairs talking with allottees who were sharing their experience after visiting the FLATS during handing over of possession to allottees of the new government FLATS at East Kidwai Nagar in New Delhi on July 04, 2018. Photo: Sandeep Saxena