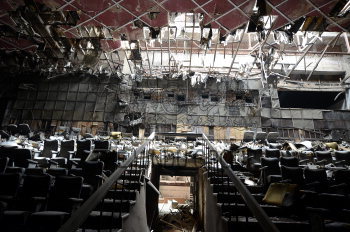 Caption : The gutted interior of Uphaar Cinema Hall in Green Park, New Delhi on June 12, 2018. On Friday, June 13, 1997, a blaze swept through the Uphaar Cinema hall during 3-to-6 pm screening of the movie Border claiming 59 lives, mostly due to suffocation and many were seriously injured in the resulting stampede. Twenty-one years on, the families of the victims continue to fight for justice. Photo: Sushil Kumar Verma