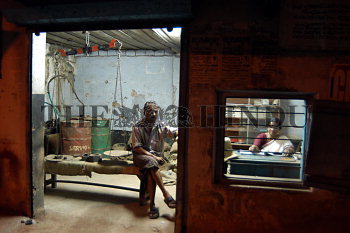 Caption : Ration outlets were a hub of activities until three years ago and long lines of cardholders could be seen in front of the outlets during festival times. But the whole scene is changed after the shift in food policies of the Central Government in 1999. A gloomy scene at a ration outlet in Thrissur district in Kerala. Photo: K.K. Mustafah