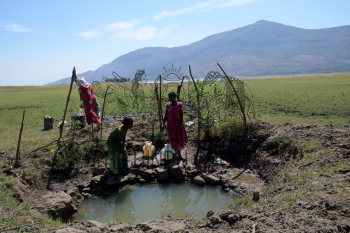 Caption : Local residents collect water from the pit dug on the banks of Malampuzha dam catchment area at Ealack, near Malampuzha in Palakkad on March 03, 2018. The water from these pits, though not suitable for drinking, sustain other household needs of these people. Malampuzha Dam supports the drinking water needs of the entire Palakkad district. The temperature has touched 40 degrees Celsius this week. Weather experts consider the probability of heat wave blowing through Palakkad. With the summer advancing, the major water sources, including Bharathapuzha and its tributaries, have dried up early This has affected paddy cultivation in the Palakkad Malappuram and Thrissur district. A report of the State Action Plan on Climatic Change (SAPCC) had listed Palakkad as one of the climate change hotspots in the State. Photo: K. K. Mustafah.