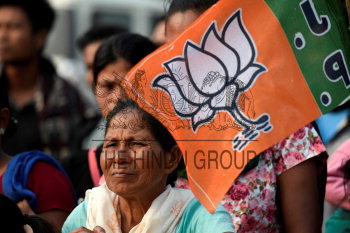 Caption : A Garo tribal woman listening to the star campaigner and Assam Finance Minister Hemanta Bishwa Sarma and BJP MP Shahnawaz Hussain during an election rally on the last day of the MEGHALAYA election campaigning in 38 Mendipathar constituency in north Garo Hills district in MEGHALAYA on February 25, 2018. MEGHALAYA and Nagaland Legislative Assembly elections will be held on 27 February 2018 and results to be declared on 3 March 2018. Photo: Ritu Raj Konwar