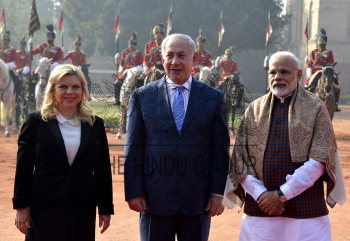 Caption : Prime Minister Narendra Modi welcoming his ISRAELI counterpart Benjamin Netanyahu and his wife Sara, during a ceremonial reception at the forecourt of Rashtrapati Bhawan, in New Delhi on January 15, 2018. Photo: V. Sudershan