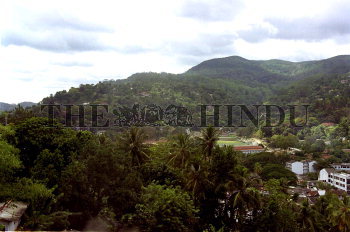 Caption : A view of the Kandy Hills, Sri Lanka. Kandy, a World Heritage City, due to its scenic beauty, congenial climate and the rich cultural heritage, has been a main tourist attraction for centuries. Available historical records suggest that Senkadagalapura (an early name for Kandy) was established by the King Wickramabahu III during the period of his reign from 1357-1374 AD. Some scholars contend that the original name of Kandy was Katubulu Nuwara located near present Watapuluwa. The more popular historical name - Senkadagala - according to folklore, originated from one of the several possible sources. These include naming after a brahmin with the name Senkanda who lived in a cave near by, a queen of King Wickramabahu named Senkanda, and after a coloured stone named Senkadagala. The present name Kandy is only an anglicised version of Kanda Uda Rata (meaning the land of mountains) which originated in the colonial era.