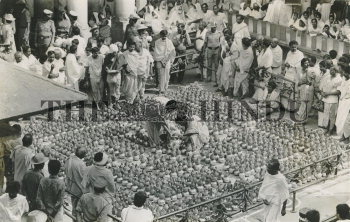 Caption : Pooja being performed at the start of the 85th Mahamastakabhisheka in the courtyard of Shravanabelagola, Karnataka, on December 19, 1993. 1008 kalasas (pots) containing holy water brought from rivers in various parts of the country are kept on the thickly spread green paddy, arranged in geometrical pattern. (Photo published in The Hindu dated 24/12/1993). PHOTO: THE HINDU ARCHIVES