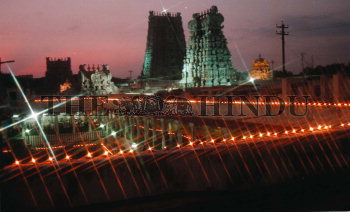 Caption : The majestic towers of Meenakshi Amman temple in Madurai, a town in the southern Indian State of Tamil Nadu, glows in the dusk. The shrine of Meenakshi was built during the reign of Chadayavarman Sundara Pandyan in the 12th Century. The 9 storeyed towers were constructed between the 13th and 16th centuries. Most parts of the temple as it exists today was built between the 12th and 18th centuries.