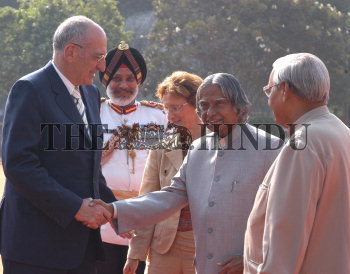 Caption : The Swiss President, Pascal COUCHEPIN, and his wife, BRIGITTE COUCHEPIN, along with the Indian President, A.P.J. Abdul Kalam, and the Prime Minister, Atal Bihari Vajpayee, during the ceremonial reception at the Rashtrapati Bhavan in New Delhi on November 10, 2003. Photo: V. Sudershan