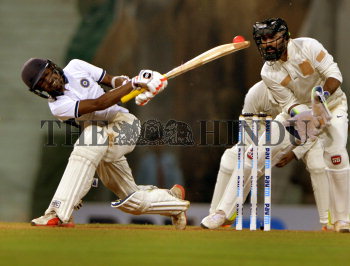 Caption : LUCKNOW, UTTAR PRADESH, 26/09/2017: ABHIMANYU Easwaran of India Blue plays a shot during his unbeaten knock of 87 against India Red as wicketkeeper Dinesh Karthik looks on during the Duleep Trophy final at the newly built Ekana International Stadium in Lucknow on September 26, 2017. Photo: Rajeev Bhatt