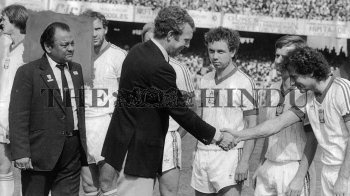 Caption : The Polish players being introduced to Bobby Moore, the captain of England's 1966 World Cup winning team during the 3rd Jawaharlal Nehru Gold Cup football tournament in Calcutta on January 27, 1984. Ashok Gosh (left), AIFF Secretary is also seen in the picture. (Pubd. in The Sportstar on February 11, 1984) PHOTO: THE HINDU ARCHIVES