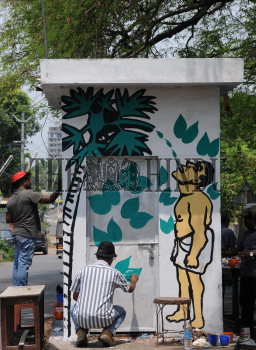 Caption : Palakkad, Kerala, 12/04/2017: Artists recreate the scenes and characters of the legendary novel `Khasakinte Ithihaasam' on the outer walls and surrounding walls of Govt. Victoria College, Palakkad on April 12, 2017. The ever green novel will mesmerize audience again as a THEATRICAL adaptation by the cultural organisation`Gramya' on April 29 and 30, 2017 on the college grounds. Photo: K. K. Mustafah.