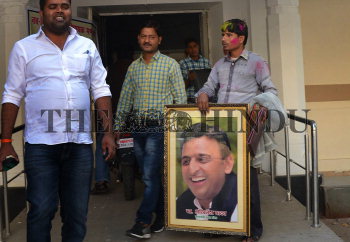 Caption : Lucknow, Uttar Pradesh, 12/03/2017: LEGISLATURES VACATING HOUSES : Family members of Samajwadi Party MLA, Ramlal Akela representing Bachhrawan vidhansabha of Raebareli vacating the government accommodation as he lost to Ram Naresh Rawat of BJP in the recent assembly election in Lucknow on Sunday. State Estate department has setup a control room at Darulshafa to felicitate the possession of accomodations to the new MLAs. Akhilesh Yadav led Samajwadi Party has registered its poor performance bagging only 47 seats in comparision to 224 seats in the 403-member house in 2012 where as BJP won 312 . Photo Rajeev Bhatt