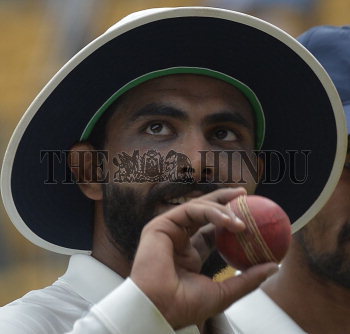 Caption : BENGALURU, KARNATAKA, 06/03/2017: Indian spinner Ravindra Jadeja, who took six wickets, seen holding the ball while returning to pavilion after the end of Australia's first innings, on the third day of the second cricket Test match between India and Australia at the M. Chinnaswamy Stadium in Bengaluru on March 06, 2017. Photo: K. Bhagya Prakash