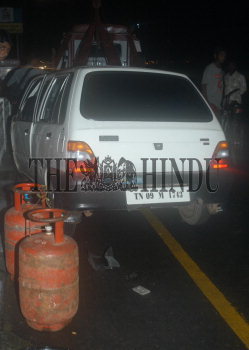 Caption : After the accident on Kamarajar Salai on October 19, 2003 involving two cars, the public were afraid to go near the vehicles to rescue the accident victims as they had used LPG cylinders as fuel for their car. One man was killed and six others injured when two cars collided head-on at the junction of the Besant Road and Kamarajar Salai near Ayodhyakuppam. Photo: K.V. Srinivasan