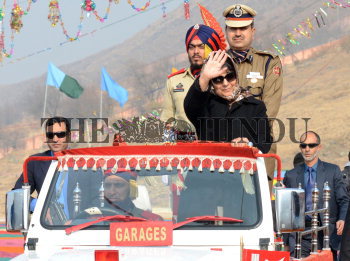 Caption : SRINAGAR, JAMMU AND KASHMIR, 14/12/2016: Jammu and Kashmir Chief Minister Mehbooba Mufti waves to the crowd as she inspects the new recruits of the Jammu and Kashmir Police while they take part during passing out parade at a police training centre in Lethpora Awantipora, some 25 kilometers south of Srinagar on Wednesday. A total of 355 recruits were formally inducted into the Jammu and Kashmir police after completing one year of rigorous training in physical fitness, weapon handling, counter insurgency and dealing with the law and order situation. PHOTO/NISSAR AHMAD.