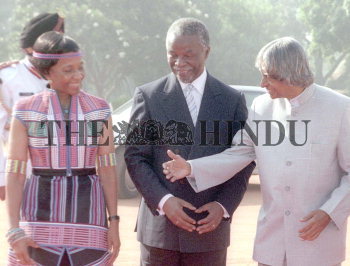 Caption : The South African President, Thabo Mbeki, and his wife Zanele Mbeki, being received by the Indian President, Dr. A.P.J. Abdul Kalam, during the ceremonial reception at the forecourt of Rashtrapati Bhavan in New Delhi on October 16, 2003. Photo: Anu Pushkarna