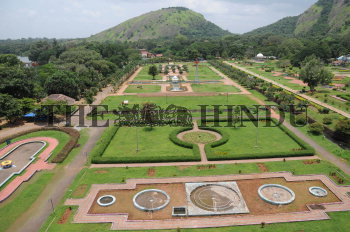 Caption : PALAKKAD, KERALA, 26/09/2016: Malampuzha dam is the largest reservoir in Kerala, located near PALAKKAD in South India with the Western Ghats in the background. A combination of masonry dam with a length of 1,849 metres and an earthen dam with a length of 220 metres, the dam is 355 feet high and crosses the Malampuzha River, a tributary of Bharathapuzha, Kerala's second longest river. The total catchments area is 145 square kilometres, while the reservoir has a capacity of 8000 square meters of water. The canal systems serve to irrigate farm land while the reservoir provides drinking water to PALAKKAD and surrounding villages. Around the reservoir of the dam are beautiful gardens and amusement parks. The highlights in the garden are the renowned rock garden, the master work of sculptor Padmashree Neck Chand Saini and the gigantic Yakshi, sculpted by Kanai Kunhiraman, an esteemed sculptor. The most interesting feature of the rock garden is that the whole place is made of unwanted and broken pieces of bangles, tiles, used plastic cans, tins and other waste materials. Photo: K. K. Mustafah