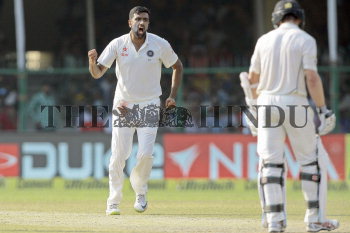 Caption : KANPUR, UTTAR PRADESH, 25/09/2016: Indian spinner R. Ashwin is all pumped up after trapping New Zealand skipper Kane Williamson on the fourth day of the first cricket Test match between India and New Zealand at the Green Park Stadium in Kanpur on September 25, 2016. Photo: V.V. Krishnan