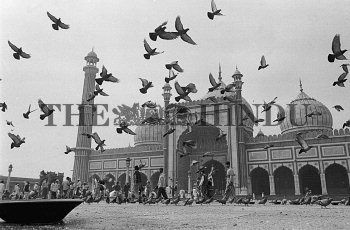 Caption : A view of the JAMA MASJID in Delhi, the Capital of India. Situated in the ancient town of Old Delhi, the JAMA or Jami MASJID is the final architectural extravaganza of the Mughal Emperor, Shahjahan. This monument was built between 1644 and 1658 by five thousand artisans. Originally called the MASJID-i-Jahanuma, or "mosque commanding view of the world", this magnificent structure stands on the Bho Jhala, one of the two hills of the old Mughal capital city of Shahjahanabad. On the east, this monument faces the Lal Quila (Red Fort) and has three gateways, four towers and two minarets. Constructed of alternating vertical strips of red sandstone and white marble, the JAMA MASJID is the largest and perhaps the most magnificent mosque in India.