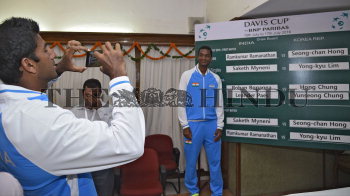 Caption : CHANDIGARH, 14/07/2016: Indian Davis Cup player Rohan Bopanna CLICKS a picture of his teammate Ramkumar Ramanathan posing with draw board after draw of tie for Davis Cup Asia-Oceania group-I games to be played between India and Korea in Chandigarh on July 14, 2016. Photo: Akhilesh Kumar