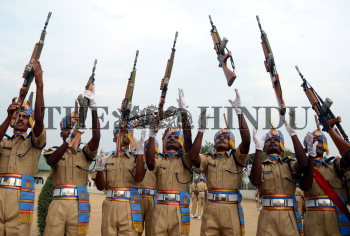 Caption : SRINAGAR, JAMMU AND KASHMIR, 14/07/2016: New recruits of the Indian Central Reserve Police Force (CRPF) celebrate after completing their passing out parade in Humhama, on the outskirts of Srinagar on July 14, 2016. A total of 512 recruits were formally inducted into the CRPF, an Paramilitary force, after completing a 44-weeks training in physical fitness, weapon handling, commando operations and counter INSURGENCY. Photo: Nissar Ahmad