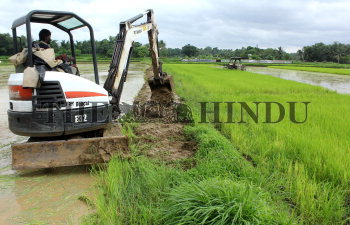 Caption : PALAKKAD, KERALA, 23/06/2016: Mud barriers being created by JCB at a paddy field at Kannady near PALAKKAD. Known as the rice bowl of Kerala, PALAKKAD is slowly witnessing a steady transition from manual labour to mechanisation regarding agricultural activities. Earlier machines replaced farm hands in activities like ploughing, transplanting, harvesting and threshing. Now even the mud barriers used to mark barriers around paddy fields are made using machines like mini JCB. Initially, such machines were used to make mud mounts in ginger cultivation. Farmers say it is economical and such bunds are sturdy, but small scale farmers say it is not feasible for them financially. Photo: K. K. Mustafah