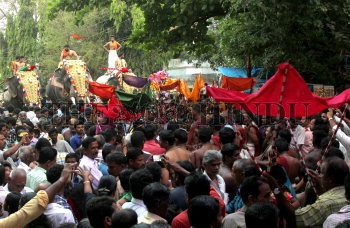 Caption : PALAKKAD, KERALA, 22/03/2016: The procession taken out as part of the Konganpada festival at the Bhagavathy temple in Chittur near Palakkad on March 22, 2016 evening in the presence of thousands of devotees. This is the only festival held in Kerala to commemorate the victory in war. No temple in the state commemorates war victories of their forefathers. The festival is conducted to commemorate the victory of the Nairs of Chittur over the militia of nearby Konganadu King Rajadhi Raja of Coimbatore during 918 A.D. It is celebrated on the first Monday in Kumbam (Malayalam calendar). The myth among the people of Chittur is that Goddess Bhagavathy saved them from the Chola King. However, historians say that the King of Kongu attacked Palakkad. The King of Cochin (Chittur was under the Cochin rulers) with the help of the Zamorin defeated them. Photo: K. K. Mustafah