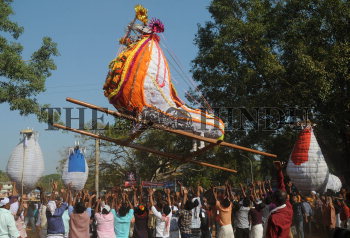 Caption : PALAKKAD, KERALA, 22/02/2016: The ‘Kuthira Kali’ in progress as part of the Chinakkathoor Pooram near Ottappalam in Palakkad on March 22, 2016. Chinakkathoor Pooram is observed in Kumbham month as per Malayalam calendar. It is the annual festival at the Chinakkathoor Bhagavathy Temple at Palappuram in Palakkad District. The most important highlight of the festival is the display of nearly 30 odd caparisoned elephants. The fortnight long festival is noted for traditional arts and music including – Panchavadyam, Kaalavela, Kuthiravela, Aandi vedan and Karivela. Tholpavakoothu, vellattu, Theyyam, Poothanum Thirayum, Hundreds of people arrive to witness various festivities. Photo: K. K. Mustafah