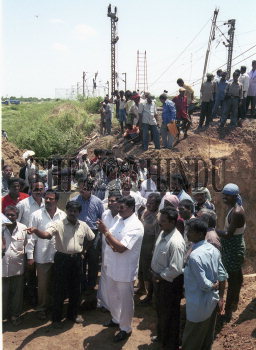 Caption : The Union Minister of State for Railways, A.K. Moorthy, inspecting the railway bridge replacement work at TIRUVALANGADU on the Chennai-Arakkonam section, about 60 km from Chennai, on Sunday, September 21, 2003. Three old railway bridges on the Chennai-Arakkonam section have been replaced in a record time of nine hours by the Southern Railway. The old stone arch/slab bridges have been replaced with reinforced cement concrete boxes, designed for modified broad gauge loading. About 1100 workers along with railway engineers, six cranes and six pocklines executed the job in a day at a cost of Rs. 35 lakhs. Photo: S. Thanthoni.