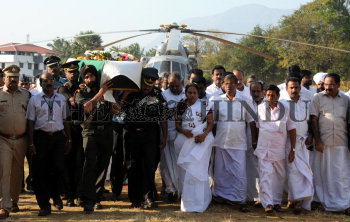 Caption : PALAKKAD, KERALA, 04/01/2016: Palakkad district collector P Marikutty after receiving mortal remains of lieutenant colonel Niranjan, killed while engaged in anti-terror activities at Pathankot. The body was taken to Government Victoria College grounds in Palakkad on January 04, 2016 by a special helicopter. The body was then taken by road to his native village Elambulassery. Photo: K. K. Mustafah.