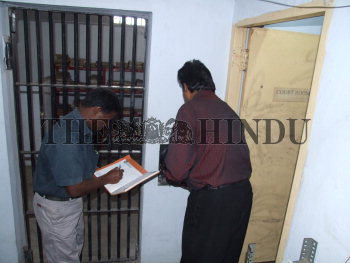 Caption : KRISHNAGIRI, 11/02/2008: A Team of the police officials inspecting the seen of occurrence at the Athiyamaan Kotai Police Station near Dharmapuri on February 11, 2008. 6 guns were looted by a gang on February 11, 2008 morning. Photo N. Bashkaran