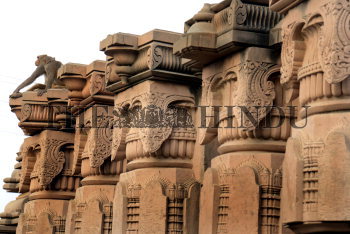 Caption : LUCKNOW, UTTAR PRADESH, 06/12/2015: INDEX-RAM JANAMBHUMI -AYODHYA: Scene at Shri Ram Janam Bhumi Trust workshop in Ayodhya. Stone carving on pillars, slabs and bricks have been done at this workshop for possible temple at Babri MASJID-Ram Janam Bhumi site. 23 years ago on December 6, 1992, a large crowd of Hindu Kar Sevaks ("volunteers") consists of VHP, Bajarag Dal and Shiv Sena activists, entirely demolished the 16th-century Babri MASJID mosque in Ayodhya, in an attempt to reclaim the land known as Ram Janmabhoomi (the mythological birthplace of the Hindu god Rama). The demolition occurred after a rally supporting the movement turned violent and resulted in several months of intercommunal rioting between India's Hindu and Muslim communities, causing the death of at least 2,000 people.. Photo Rajeev Bhatt