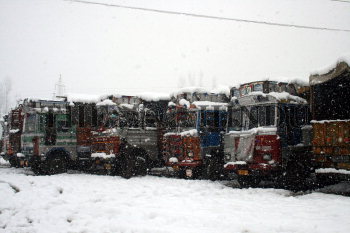 Caption : A seen stranded vehicles during heavy snow fall at national high way south of Kashmir at least 95 kilometers away from Srinagar on February 6, 2008, As national high way is blocked since from last few days.the national high way is the only who connects other states of india kashmir ,Heavy accumulation of snow in Himachal Pradesh, Jammu and Kashmir and Uttarakhand brought the chill back in the PLAINS in North India according to a news report.